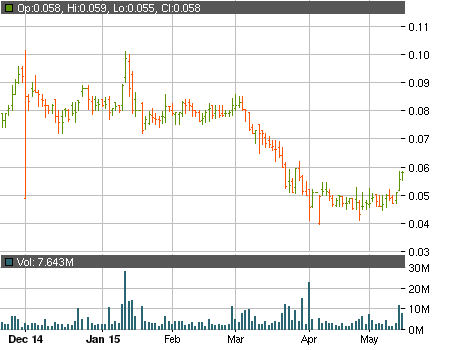 Since the start of May Amarantus Biosci Inc (OTCMKTS:AMBS) have published several encouraging PRs. The company received Notice of Allowance for two U.S. Patent Applications, they presented positive preliminary data for MANF in retinitis pigmentosa as well as preliminary data from the blood-based version of its MSPrecise diagnostic, a multiple sclerosis (MS) diagnostic test while last Friday AMBS announced that they had completed a study that further supported the rationale for MANF’s development in the treatment of Parkinson’s disease.

Quite a lot of positive developments but the stock chart of the company tells a different story. For most of May AMBS fluctuated between $0.045 and $0.05 while at the start of March the stock was sitting above $0.08. Last week, on Wednesday and Thursday, the ticker managed to surge upwards adding 8% and 8.5% to its value, respectively. On Friday however the performance was far more unstable. AMBS opened at $0.058, dropped in the red a couple of hours before the closing bell and although they bounced back up the closing price was barely higher at $0.0582.

Back in April the company was able to boost its financials considerably by closing a $5 million investment from Discover Growth Fund. In exchange for the money AMBS issued 1,087 shares of the newly designated Series G Preferred Stock. Each preferred G share can be converted into common shares at a fixed price of $0.06. And this leads us to the biggest red flag around the company – the continuous issuance of shares.

The annual report for 2014 showed that last year AMBS issued approximately 270 million shares. In 2015 however the rate at which new shares are being printed has increased drastically and for the period between January 1 and May 1 around 207 million shares saw the light of day. The financial report covering the first quarter of 2015 that was going to reveal the current share structure of the company was supposed to be filed last Friday but instead the company submitted a notification of late filing. This gives AMBS 5 more days to file the quarterly.

Investors should also note that on May 4 AMBS filed two S-3 forms. The first one covers the registration of up to $150 thousand worth of shares, warrants, preferred shares or units while the second one registers 181 million shares that could potentially be issued if the preferred G shares are converted.

Any trades involving the stock of the company should be preceded by extensive due diligence and careful planning.