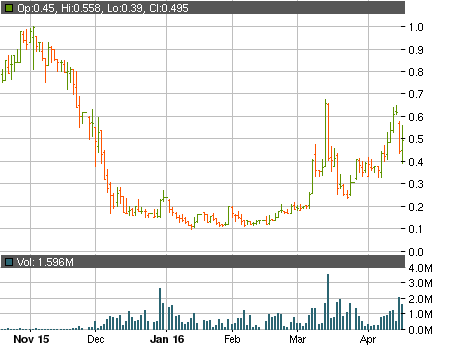 Last Thursday CannaVEST Corp (OTCMKTS:CANV) filed their annual report for 2015 and the immediate reaction to it was simply devastating – on Friday the stock of the company lost over 28% of its value and dropped down to $0.445 per share. Over the weekend, however, it seems that investors re-evaluated their sentiment towards the report and yesterday CANV managed to form a respectable bounce. The ticker climbed 11.2% up the chart for a close just below 50 cents per share at $0.495.

The balance sheet easily explains the mixed feelings displayed by the market. On one hand CANV have over half a million in cash reserves, positive working capital, and more than $11.5 million in annual sales. Many of the other pennystocks out there can only dream of achieving such results.

At the same time, however, compared to 2014 the cash at hand has decreased by close to 5 times, the liabilities are up by nearly four times, and the net loss shows a mind-boggling increase of 832%. That is right, CANV finished 2014 with around $1.3 million in net loss while now they reported more than $12.2 million. The company has stated, however, that during 2015 it incurred a non-cash expense of $6 million as stock-based compensation as well as a bad debt expense of $2.6 million related to notes receivable.

The report also showed that in 2015 5.7 million shares with an average price of $0.136 were actually issued as a conversion of the notes sold by CANV as part of the securities purchase agreement with Redwood Management LLC. Although earlier this year CANV were able to deal with the remaining convertible debt before it could have been converted entirely but they still had to issue millions of even cheaper shares – 3 million shares priced at $0.083 and 2.5 million shares priced even lower at $0.0612.

For 2016 CANV‘s inventory levels are sufficient to support their sales so the company doesn’t plan to purchase raw inventory from its supply chain arrangements. They will need to find around $1.5 million over the next 12 months in order to support the pharmaceutical business segment, though. At the very end of last year CANV acquired two product candidates after completing the acquisition of CanX, Inc. and it hopes to file an Investigational New Drug application with the FDA in the future.

CANV may lack some of the more glaring red flags usually found when dealing with a pennystock company but that doesn’t mean that the risks around it should be taken lightly. It is still paramount to do your own due diligence before committing to anything.