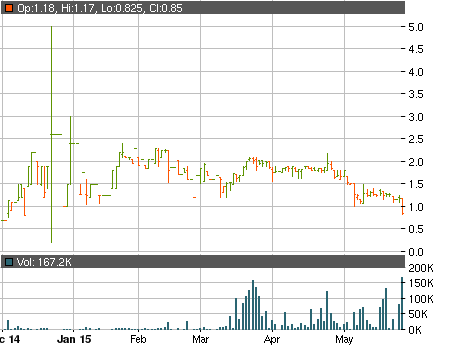 Yesterday’s session was a slap in the face for Cybergy Holdings, Inc. (OTCMKTS:CYBG) shareholders. The company dropped nearly 28% in the last market session, slipping to its lowest close for 2015 so far. CYBG closed at $0.85 per share after 190 thousand shares changed hands.

The company is a pink sheet public entity that originated from a late 2014 reverse merger, working in the field of cyber security. It is also the target of a recent coordinated stock pump campaign conducted through emails and paid for primarily by third party Cream Consulting, with an entity called ACN LLC paying for a few of the emails.

The first promotional email for CYBG that we tracked dates back to mid-April 2015. Over the last couple of weeks there came another 20+ emails, compensated between $4,000 and $9,500.

For those willing to play pumped stocks which just crashed by almost a third, here is the balance sheet CYBG published in its latest quarterly for the three months ended March 2015:

The company recorded income of $106,441,000 due to fair value adjustment of derivative and put liabilities, in turn due to CYBG‘s share price dropping from $2.40 in Dec 2014 to $1.86 by mid-March. One can only imagine how much that adjustment will be by the time the next filing come through, considering CYBG is over 50% down from this $1.86 per share.

The company last reported having 20 million outstanding common shares and 3 BILLION authorized. The derivative liabilities section of the report is too long and contains way too many large numbers for us to detail it here so it’s advisable that everyone interested in the company goes through it on their own.

CYBG last filed a Form D, informing that it sold $1.01 million worth of Rule 506(b) shares under its total $2.5 million offering.