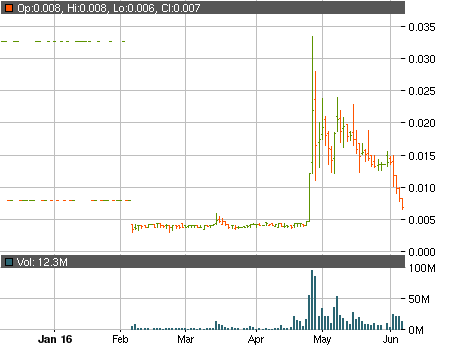 Friendable Inc (OTCMKTS:FDBL) showed some impressive performance back in the end of April when it managed to gain a lot of value, climb well above the 1 cent per share mark after gaining more than 300% over the course of just two sessions and registering massive volumes.

The reason for the upward move, however, was trivial – the stock had been pumped by paid promoters. Meanwhile, the company itself is far from being appealing to investors. A quick look at the numbers contained in FDBL’s financial report for the first quarter of the year reveals just how grim the situation is.

Looking at these numbers we can say that we aren’t surprised that FDBL has been losing altitude. The only thing that we are surprised by is that it took so long before the ticker corrected more seriously after the jump fueled by paid pumpers.

FDBL has closed the past five sessions in the red, recording double digit losses in four of them. Yesterday we saw the ticker lose another 16.87% of its value and close at $0.007. Volumes have dropped significantly and the 13.80 million shares that changed their owners generated only $97 thousand at those prices.

It seems, however, that this is as low as FDBL will sink for the moment. The ticker is showing positive movement and is already 15.22% in today’s trading. Still, be sure to do your due diligence and weigh out the risks before putting any money on the line.