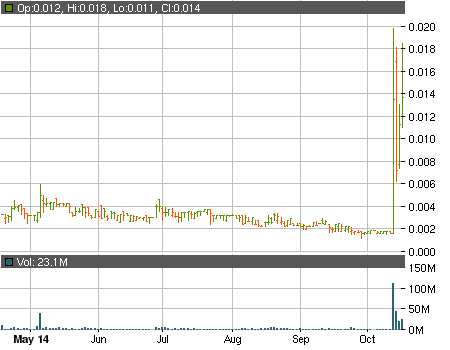 Between October 10 and October 13, G. Darcy Klug, a beneficial owner of more than 10% of Independence Energy Corp (OTCMKTS:IDNG)’s stock, increased his position in the company by buying a total of 660,000 shares on the open market at $0.0016 a piece. By the looks of things, this was a very wise decision.

On Monday, just minutes after Mr. Klug closed his transaction, IDNG absolutely exploded and six and a half hours later, it was sitting at $0.0135, a whopping 743% above its previous close. It did suffer a rather scary correction during the following session, but over the last two days, it has shown us that it’s more than capable of recovery. The total gains from Wednesday and Thursday come in at around 90% and IDNG is now sitting at $0.0137 per share. Perhaps more importantly, yesterday’s dollar volume of nearly $360 thousand suggests that people are getting back to the stock and judging by the posts around discussion boards and social networks, they seem convinced that IDNG can benefit from the need to keep the dreadful Ebola virus at bay. But is this really the case?

The truth is, nobody can say for sure. The latest press release is now three and a half months old and although IDNG ditched the oil and gas business in March, their website still suggests that they’re in the mineral exploration sector. Members of the management team have yet to even mention the Ebola virus which means that the stock performance, although decent enough, is caused by nothing more than rumors and speculations.

One thing is for sure, if they want to capitalize on their thermometers, IDNG will need to do something about the balance sheet. Here’s where the company stood on July 31, 2014:

According to the Subsequent Events section of the report, IDNG borrowed around $15 thousand from a couple of shareholders, but we’ll leave it up to you to decide how far this cash injection can get them.

So, to recap, IDNG‘s financial situation is nothing short of horrific. The stock is currently pushed up by nothing more than speculations and to top it all off, it has shown us that it’s prone to losing nearly half of its value in a single day. A fair amount of red flags and plenty of things that could tempt Mr. Klug to sell his shares while the price is still high. In case you’re courageous enough to ignore the facts above, you might want to consider one more thing before jumping in.

If you take a look at some of our older articles, you’ll see that IDNG have had some problems with toxic debt over the years. They set themselves the task of clearing all of the convertible notes out of the balance sheet and the latest 10-Q shows that they have managed to do it. Unfortunately, they were forced to print quite a lot of discounted stock along the way.

We read in the report that during the six months ended July 2014, the company issued a total of 63,711,722 shares of common stock in order to satisfy $81,080 worth of principal and accrued interest. This means that the average conversion rate comes in at $0.0012 per share which, funnily enough, coincides with the 52-week low registered by IDNG two and a half weeks ago.

Proceeding with caution is absolutely essential.