MyEcheck Inc (OTCMKTS:MYEC) Shies Away After Flirting with the $0.04 Level 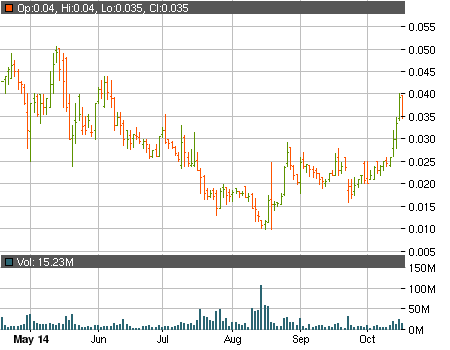 The week for MyEcheck Inc (OTCMKTS:MYEC) started on a positive note. Half an hour before Monday’s opening bell, the company announced that it’s filing a patent infringement lawsuit against Zipmark Inc and this, it seems, was enough to get investors trembling with excitement.

Three sessions of heavy buying pushed the ticker from just $0.026 all the way to $0.039, but just as everyone thought that smashing through the $0.04 barrier for the first time since June is imminent, MYEC faltered and it slipped by around 10% yesterday. It closed the session at $0.035 on a dollar volume of just under $560 thousand. So, what went wrong?

There are some people who believe that yesterday’s slip was nothing more than a consolidation that will help MYEC present a more solid performance over the following days and weeks. Others, however, are quite upset with the company and its stock. We can see why.

Let’s start with the latest financial report. During the second quarter of the year, MYEC registered $182 thousand in revenues and on June 30, they also logged a quarterly net profit of around $32 thousand. Considering the colossal number of penny stock companies that spend years without starting any sort of operations, MYEC‘s results aren’t too bad. Once you take a look at the report for the first quarter, however, you’ll see that not everything is going according to plan. The revenue figure for the three months ended March 31 stood at $1.36 million and the company also recorded an impressive net income of around $1.32 million. Unfortunately, the management team doesn’t appear to be too keen on giving us the reasons for the 86% drop.

There is one thing that seems to be bothering the shareholders even more – the reporting status of the company. MYEC de-registered their stock with the SEC in October 2012 and for the last two years, they’ve been using the alternative reporting standard. There’s no shortage of investors who avoid putting their money in Pink stocks and we can’t say that we can blame them because we’ve seen numerous shady companies on one of OTC’s lowest tiers.

MYEC are apparently aware of the fact that many people walk away from the stock simply because it’s a Pink Sheet and a few months ago, they told us that they’re planning on becoming an SEC reporting company. On October 1, the management team said that the Form 10 is currently under review and they also promised that it will be “filed this week”. More than two weeks later, nothing has happened and the shareholders are quite angry about this fact. That’s understandable. After all, the lack of popularity of their stock is affecting them as well.

The people who are contemplating a potential investment, however, are the ones who should probably be even more interested. As we’ve mentioned in some of our previous articles, there are some questions regarding the share structure. According to the latest report, all the discrepancies should be sorted out by the auditors who are putting together the long-awaited Form 10. We, for one, are quite eager to take a look at the filing ourselves and see where all the issued stock had gone.

In conclusion, we can say that MYEC missed a deadline and the hesitant stock performance as well as the copious amounts of criticism the company has received over the last few days show that in Pennyland, these sort of mistakes are costly. Unfortunately, the ones taking the full brunt of the impact are the shareholders. About fifty minutes after today’s opening bell, their stock is sitting at $0.03 per share (14% in the red).