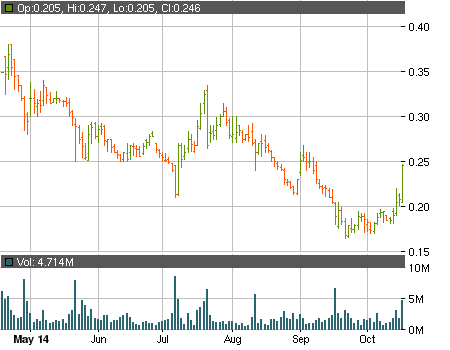 It’s been an exciting week for Nuvilex Inc (OTCMKTS:NVLX) and its shareholders. On Monday, the company announced that it’s applying for an Orphan Drug Designation from the FDA for the Cell-in-a-Box® treatment for pancreatic cancer. The management team didn’t want to run the risk of giving us deadlines for the final approval, but judging by the stock performance, investors didn’t really need them.

Volumes picked up immediately and the ticker started climbing towards the higher end of the charts. Yesterday, NVLX announced a licensing agreement with the University of Technology in Sydney and that’s when things really heated up. In a matter of just six and a half hours of trading, the ticker managed to gain more than 18% while racking up a dollar volume of around $1.1 million. NVLX is currently sitting at $0.246 per share.

This is a far cry from the 52-week high of $0.62, but many people reckon that getting back to these peaks shouldn’t be too much of a problem for the stock. Some even say that it could be out of the sub-dollar levels before the end of the year. But are these projections really feasible?

Indeed, the recent developments around the company suggest that NVLX is experiencing some progress. If the FDA gives the cancer treatment the green light, things could really start moving and the licensing agreement with the Australian university should also push their diabetes cure in the right direction. There’s no getting away from the fact, however, that many more pieces need to fall into place before NVLX can see some significant growth.

The good news is, they do have a relatively solid balance sheet. Here’s a summary of the most important figures as recorded on July 31:

The lack of revenue and the rather big net loss shouldn’t be too much of a shock to anyone who has followed the company. The fact that they have enough cash to get them through to the end of July 2015, however, is definitely a step in the right direction.

All in all, shareholders can do little more than hope for fair wind from now on and judging by the internet forums, they’re doing just that. Numerous people support the company in its endeavors and, willingly or not, they’re drawing quite a lot of attention to NVLX. If you are contemplating jumping in, however, you should bear in mind that dilution does appear to be a problem.

Back in April 2013, the number of issued and outstanding shares stood at around 482 million. By October 2013, it had grown to 588 million and according to the latest 10-Q, it was sitting at over 710 million a month ago. A closer look at the report reveals that some of the stock saw the light of day at a hefty discount. During the three months ended July 2014, for example, NVLX issued more than 17.6 million shares in order to satisfy $1.5 million worth of stock payables (less than $0.09 per share).

If NVLX want to keep their shareholders happy, they’ll need to give the printing press a rest. The future reports should tell us if they’ll do so, but in the meantime, considering all the risks before putting any money on the line is absolutely essential.