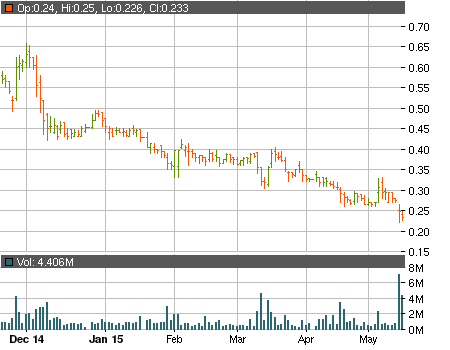 Last Thursday OncoSec Medcial Inc (OTCMKTS:ONCS) issued a rather shocking PR – a 1-for-20 reverse split had been authorized. The reverse split will become effective and the company’s stock will start trading on a post-split basis before the open of today’s session. For the next twenty business day the ticker of the company will be ONCSD, their authorized shares will be reduced from 3.2 billion to 160 million while the outstanding shares will shrink from 247 million to a little over 12.3 million.

Investors were far from thrilled by the news. On the day the split was first revealed investors traded over 7.3 million shares, ONCS hadn’t seen such volumes for nearly a year. As a result of investors selling their shares the stock price of the company suffered a 10% crash and the ticker closed at $0.247. The negative momentum continued through Friday’s trading when ONCS corrected by another 5.8% on a volume of 4.4 million shares.

In the world of pennystocks when a reverse split is implemented it is usually preceded by a crushing dilution of the common stock and as a result a bloated outstanding shares count. In the case of ONCS however the reasons for the reverse split are far different. OncoSec will try to leave the OTCMarket in an attempt to move to the NASDAQ. The split will help them meet the minimum requirements of the national exchange. If they are successful the benefits would be enormous – ONCS will enjoy more exposure, investors will have greater confidence in the stock and the company will have access to more sophisticated sources of external funds.

For now though the stock should remain extremely volatile. The chart performance of the ticker since the start of the year has been far from encouraging. For almost six-months now ONCS have been dropping down the chart with the losses in share price amounting to over 60%.

With over $30 million in cash at the end of January, funds that according to the company will be sufficient to keep them going for the next twelve months, ONCS was already far from the typical pennystock. Will the potential NASDAQ uplisting and the upcoming catalysts be enough to keep the stock at its post-split price of over $4 though? It is up to you to decide.