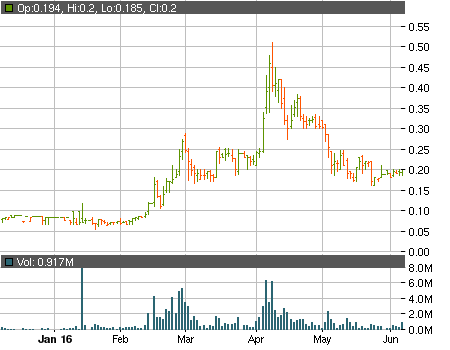 Yesterday Provision Holdings Inc (OTCMKTS:PVHO) issued a new press releasing announcing the signing of a Memorandum of Understanding with Salon Life Network, a national media network. The plan is to create a partnership that would offer PVHO‘s 3D holographic kiosks at the front lobbies of SLN’s participating salons.

The positive news, however, failed to leave any meaningful impact on the performance of the company’s stock. In fact, if the stock hadn’t made a sizable jump right before the closing bell it would have closed the session with a loss. Still, PVHO finished the day with a gain of 4.12% at $0.20 per share but will they be able to hold on to their gains?

On May 24 the company submitted its financial report for the third quarter of its fiscal year and according to it at the end of March PVHO had:

Compared to the majority of the other pennystocks PVHO appears to be in far better shape. Indeed, there aren’t that many pennystock companies that can boast having $2 million in cash reserves as well as generating $2 million in revenue in a single quarter. Not to mention that for the same period a year ago PVHO reported just $129 thousand in cash and $172 thousand in revenue.

The problem is that the amazing revenue growth has been simply not enough when the net loss has been growing as well, up from $66 thousand a year ago. In addition, the company finished the quarter with a working capital deficit of approximately $4 million while the accumulated deficit has almost reached $30 million. In the press release discussing the quarterly results PVHO mentioned a slowdown in the quantity of installed kiosks and this raises some doubt about their ability to reach the previously announced milestone of 1000 installed kiosk by the end of June.

When doing you due diligence on the company you should also pay extra attention to the fact that during the nine months ended March 31, 2016, PVHO raised $4.1 million in funds through the sale of Series A Senior Convertible Promissory Notes that can be turned into common shares at a conversion price of $0.10 per share, which is 50% lower than the current market price of the stock. According to the subsequent events section of the report back in April 4.3 million shares saw the light of day through such conversions.