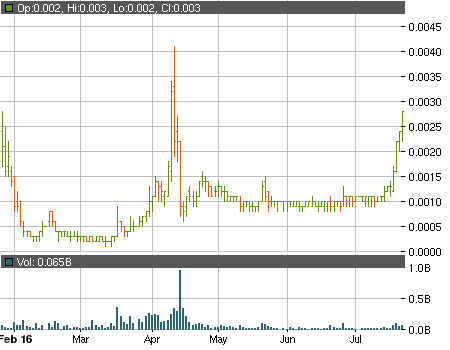 For the past four sessions the stock of Strikeforce Technologies Inc (OTCMKTS:SFOR) has been rapidly climbing up the chart. On Friday the ticker rose by another 16.6% and closed the day at $0.0028. The stock has more than doubled in value from its July 19 opening price. Investors are showing increased support for the company and recent the daily volumes have been significantly higher than the monthly average of 23 million shares.

No matter how impressive the current uptrend might seem iit is important to note that there is nothing immediately obvious supporting it. The last PR issued by SFOR is now nearly a month old. The financials of the company aren’t particularly inspiring, either. It finished the first quarter of the year with a working capital deficit of over $7 million, less than $83 thousand in revenue and a loss from operations of more than half a million.

On January 15, 2016, however, SFOR achieved its first patent litigation win after the company reached a settlement agreement with none other than Microsoft Corporation (NASDAQ:MSFT). Under the terms of the settlement SFOR licensed its patents to Microsoft and received a lump sum payment which in the latest quarterly report was revealed to be in the amount of $9.75 million. Such a sum is massive for a small pennystock company but SFOR had to pay nearly half of that as incurred fees related to the settlement.

Although this left the company with over $4.5 million in proceeds the shareholders of SFOR were still drowned in dilution through the conversion of debt, and when we say “drowned” we really mean it. Last year SFOR performed two monstrous reverse splits – one at a ratio of 1-for-650 and a second one at a ratio 1-for-1000. This left the company with approximately 22.7 million outstanding shares at the start of this year. Less than six months later SFOR reported having more than 2.2 BILLION outstanding shares. Nearly 1.8 BILLION of them got issued at conversion prices ranging from $0.000058 to $0.0008 during the three months ended March 31, 2016. The subsequent events section of the quarterly report shows the issuance of another 313 million shares through conversions at $0.0001 per share as well as 155 million shares being issued through the cashless exercise of warrants.

SFOR has used some of its funds to repay the principle balance of its outstanding convertible notes with adjustable conversion features which could slow down the further dilution of the common stock. Still, investors shouldn’t underestimate the impact that the already issued extremely cheap shares could have on the market price of the stock if they get unleashed on the open market.

SFOR is continuing its legal battles and on June 21 announced that it has initiated new patent litigation against three major competitors. Will this be enough to offset the myriad the red flags? Ultimately, it is up to you to decide.