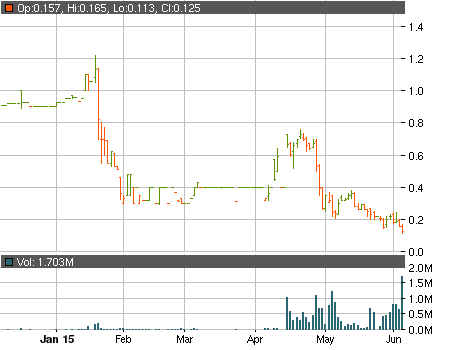 Yesterday’s session brought another disappointing crash for Tanaris Power Hldgs Inc (OTCMKTS:TPHX) shareholders. The company’s share price slid 20% to stop at $0.12 per share. Less than a month ago TPHX was trading for $0.36 on the open market. Yesterday’s drop took place on particularly large volume of 1.7 million shares traded.

What is the reason for those severe drops that sliced 66% off TPHX‘s share price within less than four weeks? For one, there is an ongoing pump campaign targeting TPHX that started in mid-April and redoubled its efforts in late May. A total of nearly 80 TPHX pump emails have been sent since the pump began, each backed by various amounts of money promoters decided to hand out for advertising the ticker.

The majority of the paid pumps go the usual route – they present TPHX as a cheap entry in the energy sector, then slap the names of multi-billion giants such as Tesla in the promotional email, just for good measure. Let’s see if TPHX and Tesla have anything in common, outside of working on battery technologies. Here is what TPHX had to show for itself as of its last quarterly report for the three months ended Jan 2015:

Those are not the figures a new Tesla has on its books, those are the figures of yet another near-cashless pink sheet stock that did not make a dime of revenue in its four years since inception and decided to change name and course of business, then got pumped and is now crashing.

TPHX was formerly called Recursos Montana S.A. and was originally incorporated in 2010. The four years leading up to the March 2015 name and business change resulted in Resursos Montana reaching the ‘pre-exploration’ stage of development, without a dime of revenue generated.

The dreary balance sheet, the fact that the stock is still being targeted by paid pumps and is dropping like a rock should be enough of a red flag for traders to pause and do their own due diligence on the ticker before doing anything else.