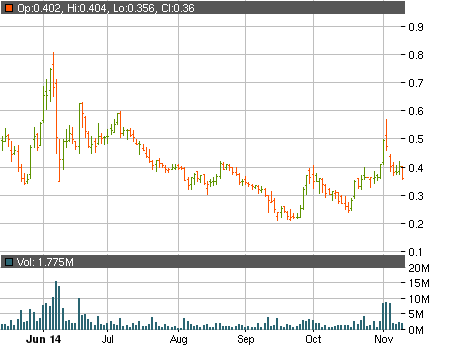 The scales have tipped once more for Terra Tech Corp. (OTCMKTS:TRTC). The company dropped in double digits yesterday, pressed by heavier selling near the closing bell. TRTC was 10% in the red on 1.7 million shares traded. The press release that hit the wire came too late into the day to influence the price.

The company announced that its CBD extraction facility completed its test runs and has been launched into active production. The lab will produce ‘oils, waxes and other mediums’, containing concentrated CBD. Branded products are expected to hit the shelves sometime in December. The rest of the announcement is mostly fluff but the core news item is sure to get TRTC longs excited. An interesting detail is that, to the best of our knowledge, the facility relies on a single 20-liter pressure extractor.

The news will serve as chart fuel that will likely propel TRTC back up and help keep it afloat until definite news concerning the company’s Nevada licenses are published. While the launch of the CBD extraction lab is commendable, it’s not the reason people hold TRTC stock. Until TRTC comes out with clear statements about how many cultivation, production and dispensary sites it will have in Nevada, the stock is likely to keep bouncing in both directions like it’s doing now.

There is no real hard information on what’s happening with the Nevada licensing on a larger scale as there has been a mismatch between entrants approved by the state and approved on a local, county-level. This creates a situation where even Senator Tick Segerblom admitted its’ not too clear what happens next.

It remains to be seen where TRTC goes next. The company’s next quarterly report is also due any time now and it will make for interesting reading when it’s published.