That Marketing Solution Inc (OTCMKTS:TSTS) Gets Pumped Once More 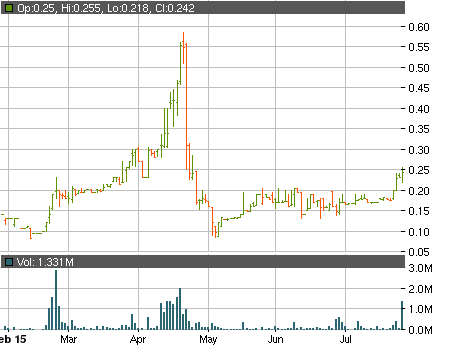 Since late-May the stock of That Marketing Solution Inc (OTCMKTS:TSTS) has been fluctuating mostly between 15 and 20 cents per share. For the past four sessions however the ticker has been climbing to higher price ranges closing yesterday’s trading day at $0.242. Not only that but during the session nearly 1.4 million shares changed hands, the last time the company saw such volumes was in mid-April.

The catalyst for the current uptrend was the PR published by the company on July 22 when TSTS announced their first international order for a large network marketing company in Asia totaling $68 thousand. The news represents a significant step in the right direction for the company having in mind that so far TSTS has not been generating any revenues. In fact, the financial state of the company has been nothing short of atrocious – TSTS finished the quarter ending May 31 with:

Even with the proceeds from the purchase order the fundamentals of the company remain completely disconnected from the overly-inflated market cap of more than $68 million commanded by TSTS at the moment.

The problem is that the red flags surrounding the company run far deeper than the disappointing financials. TSTS has been touted by paid promoters since February and so far over 70 different email alerts have been sent. The latest wave of emails came yesterday and undoubtedly played its part in attracting the attention of the market. There were two main groups of newsletters involved – the affiliates of Galaxy, LLC (PennyPickFinders, PennyStockProhet, SecretStockPromoter) and some of the affiliates of EGM FIRM (BestDamnPennyStocks, TheNextBigTrade). The Stock Commander is also still doing its part in creating as much artificial hype as possible.

Keep in mind that thanks to the pump back in April TSTS broke through 55 cents per share. Investors who bought in at those price ranges may have soon come to regret their decision though because less than three weeks later the stock fell below 9 cents.

The people who might have benefited the most from the increased interest towards the stock created by the pump are the owners of the 26.8 million shares that were sold by TSTS at just $0.001 each. Even more discounted shares could see the light of day thanks to the two convertible notes in the aggregate amount of $275 thousand that were issued by the company at the end of March.

The stock must be considered as an extremely dangerous choice. The paid pump, the millions of underpriced shares that could be unleashed on the market and the unrealistic market valuation of the company are risks that should not be underestimated in the slightest.