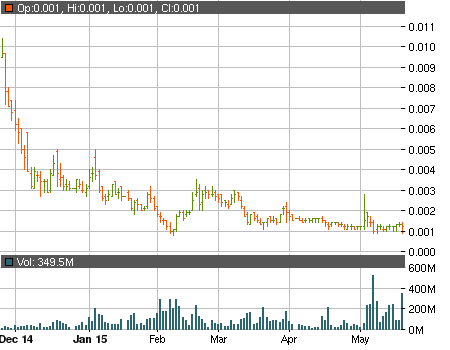 Back in March 2014 the stock of Vapor Group Inc (OTCMKTS:VPOR) climbed to a high of around 45 cents per share. Since then, however, the chart performance of the ticker has been a total nightmare and investors who bought the stock at those hype-induced prices and are still holding it are facing losses of over 99%. Back in February, this year, VPOR sunk to a new 52-week low of $0.0008 and it seems that they may be headed into the triple zero prices once more with the stock currently sitting at $0.0012.

The risks surrounding VPOR are extremely serious. In our previous articles we already warned you that at the end of 2014 the company had over $3.4 million in outstanding convertible notes and accrued interest. Just for the first three months of the year $1.7 million of them got turned into common shares drowning the shareholders of the company in dilution. The outstanding shares count bloated from 930 million to over 2.6 billion by the end of March. On March 20 VPOR announced that they are going to increase their authorized shares to 4.5 BILLION.

The goal of the company is to eliminate the entirety of their convertible debt by the end of June and although they have prepaid some notes and have expressed their intent to prepay more it is safe to assume that the majority of the notes will be converted into common shares at discounted prices.

Unfortunately investors had to face more bad news yesterday when instead of its quarterly report for the first quarter of 2015 the company filed a new 8-K form. The quarterly report should have been completed by May 15 but through a notification of late filing VPOR received a 5-day extension. In yesterday’s filing however the company announced that they have changed their independent accounting firm. More importantly the 8-K said that the annual report for 2014 will have to be amended and as a result the quarterly will be delayed even more. Without any access to more up-to-date information investors have no way of knowing how much debt can still be turned into common shares.

What we do know though is that according to this filing from the Florida Division of Corporations’ web site VPOR have once again increased their authorized shares and now it stands at 8 BILLION shares. Ultimately it is up to you to decide whether VPOR will manage to offset the crushing dilution through an expansion of their operations and increased revenues. Just remember that it is always for the best to do your own due diligence before committing to any trades.