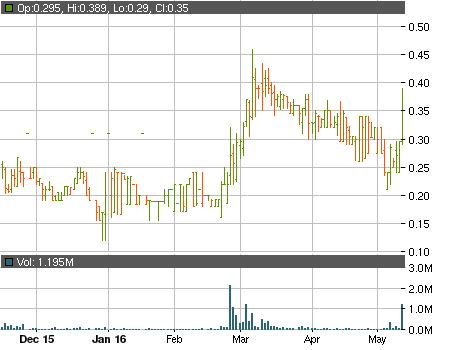 The stock of Ubiquity Inc (OTCMKTS:UBIQ) has been making a resurgence lately. Yesterday, however, the impressive daily gain of over 18% was also accompanied by a massive surge in interest from investors. During the trading day around 1.2 million of the company’s shares changed hands, volume that is nearly 30 times higher than the monthly average of 41 thousand shares.

The intense trading could be explained with the new PR that was published by the company. In it UBIQ announced that it has signed a five-year, $3.75 million licensing deal with Dash Radio. The news is indeed quite significant but was yesterday’s ecstatic reaction from the market warranted? After all, 60% of the $3.75 million are going to be paid in the fourth and fifth year of the licensing deal.

Not to mention that yesterday’s announcement does little to alleviate any of the long line of red flags that hang above UBIQ. The company’s OTCMarkets profile page is still branded with the skull and crossbones Caveat Emptor sign due to UBIQ‘s missing financial reports. At the start of this month the company did submit a new quarterly report but it covers the period ended September 30, 2015. The numbers may be over 7 months old but in the absence of more current data investors will have to rely on them. So, what did UBIQ have in terms of financials back then?

And if you think that the balance sheet is kind of terrible just wait until you see the issuance history of the company. In the nine-month period ended September 30, 2015, UBIQ issued over 24 million shares for approximately $2.1 million in proceeds. Since then, though, another 55.1 million shares have been sold at an average price of $0.03 per share.

Investors might also want to take a look at the Legal Proceedings section of the quarterly report. It shows that quite a few lawsuits have been filed against UBIQ alleging breach of contract and failure to repay various convertible notes.

We are not done yet, though. When deciding whether to put any money into UBIQ it may be wise to factor in the fact that the stock is quite often targeted by paid pumps. Indeed, even yesterday’s session was influenced by a paid promotion. The infamous newsletter The Wolf of Penny Stocks issued several alert emails for UBIQ. According to the disclaimers a $45 thousand compensation has been paid for the this latest round of touting.