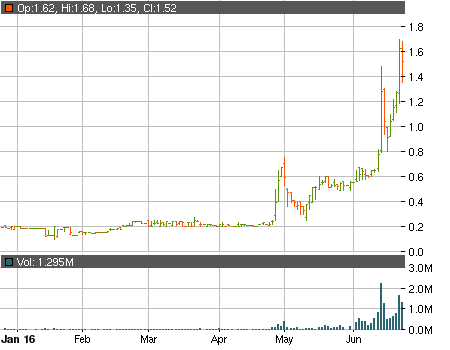 Valmie Resources Inc (OTCMKTS:VMRI) has been climbing the charts in the past couple of months after moving sideways throughout the first quarter of the year. The volumes have increased significantly since the beginning of the month and VMRI has reached a rather large market cap.

The company is valued at around $100 million, a valuation we usually see in biopharmaceutical pennystocks, with significant assets. Meanwhile, VMRI’s balance sheet for the quarterly period ended February 29 look quite horrifying. Let’s have a quick look at some of the numbers of prime interest.

Those numbers are pretty depressing and certainly can’t back a market cap of $100 million. Still, that hasn’t stopped VMRI from climbing the charts so far. We see, however, some hesitation in yesterday’s session.

After gaining some 27.56% in Wednesday we saw the ticker drop 6.17% in yesterday’s session, closing at $1.52. The 1.31 million shares that changed their owners generated $2 million in daily dollar volume and it seems like this is how much VMRI will correct.

The ticker is doing fairly well in today’s trading, and has almost recovered yesterday’s loss. The market cap of VMRI, however, doesn’t seem sustainable so you should be sure to do your due diligence and weigh out the risks before putting any money on the line.