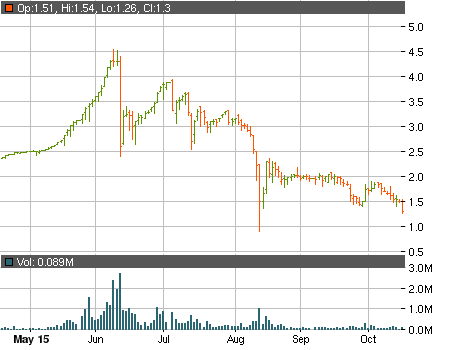 Out of the last nine sessions NuGene International Inc (OTCMKTS:NUGN) has managed to close in the red eight times. The one time the stock didn’t end the session in a loss it closed completely flat. After wiping more than 13% during Friday’s trading currently the ticker is sitting at $1.30 per share. Just four months ago, back in June, NUGN reached prices above above $4.50.

The sole reason for those highs though was a multy-million pump that involved numerous waves of hard mailer brochures being sent out to investors’ mailboxes. Without the artificial hype of the promotion there was nothing supporting the company and now their shares are trading 71% lower. Even at the current levels however the stock could be viewed as quite inflated.

Especially when you take a look at the latest financial report filed by NUGN. It covers the second quarter of the year and according to it NUGN finished the period with:

While over half a million in sales is definitely an impressive achievement for a pennystock the company is still far away from becoming a profitable entity. In September NUGN sold a $500 thousand promissory note but even with these newly received funds the company cannot justify its $51 million market cap.

Early in the morning today NuGene issued a PR announcing the filing of two new provisional patent applications that should further extend the intellectual property around the company’s proprietary stem cell formulations. Will this be enough to stop the stock from incurring another sizable crash down the chart?

At least early in the session it seems that the PR is working with NUGN currently trading 6.15% in the green at $1.38.