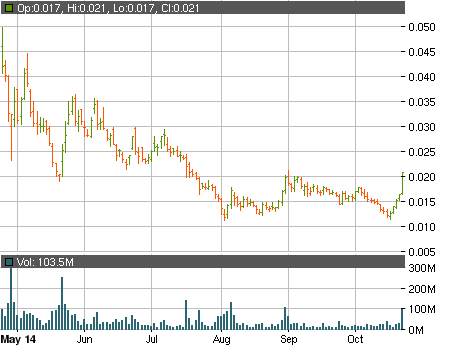 Yesterday virtually the entire pot sector of the OTC was swept by a tidal wave of enthusiasm. Share volumes were through the roof and share prices followed suit for most of the popular names in the sector. American Green, Inc. (OTCMKTS:ERBB) was no exception. The company closed 26% up on 103 million shares traded – its biggest volume for nearly two months back.

The reason for ERBB‘s climb is not directly related to the company and its activity. There were no new filings or press announcements coming from ERBB yesterday. The company’s share price simply hitched a ride on the new wave of giddy excitement that is sweeping pot investors. A number of factors came together to trigger this cross-sector swell.

One of the biggest factors is probably the appointment of Vanita Gupta as acting head of the civil rights division of the DoJ. Gupta is presented as an outspoken defendant of legalization across the board by various media. Additonally, the November vote for legalization in three states is drawing nearer. The ballot will be held on Nov 4, not two weeks from today and will determine whether Alaska, Oregon and DC will be following in the footsteps of Colorado and Washington.

A featured video piece on Yahoo Finance focused on another marijuana company that has been around for a long while – Medical Marijuana, Inc. (OTCMKTS:MJNA). This sort of exposure for virtually any of the popular OTC pot stocks creates momentum for the whole sector.

How long this new sector-wide rally will continue remains to be seen. With some stocks putting on as much as 50% or even 160% in a single session, long investors should be on the lookout for profit takers and sudden reversals following climbs that are difficult to sustain.