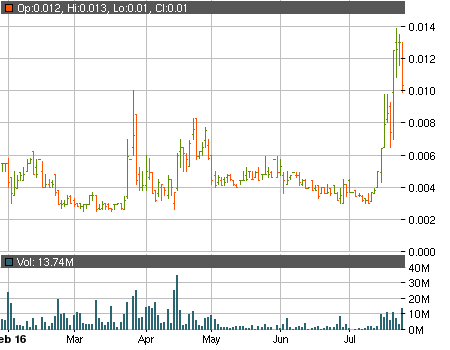 Between July 12 and July 25 the stock of Max Sound Corp (OTCMKTS:MAXD) formed an impressive uptrend of 9 sessions of gains and just a single one in the red. The price of the stock soared from a little over $0.003 to a high of $0.014. Such price ranges proved to be highly unstable, though, and yesterday MAXD crashed hard, wiping nearly 21% of its value and closing at $0.0103 per share.

The company could continue to retrace its steps down the chart. After all, its climb up the char wasn’t supported by anything substantial in the first place. The last PR issued by MAXD is now three months old – on April 21 the company announced that it had entered into a Term Sheet with another pennystock, Imperalis Holding Corp (OTCMKTS:IMHC). Under the terms Imperalis would acquire “certain MAXD HD Audio Technology IP component assets” for 48 million shares. According to the press release the anticipated date by which a definite agreement was supposed to signed was May 31 but as we said earlier no new PRs have been issued about the progress of the deal.

The fact that IMHC finished the first quarter of the year with $3,600 in cash, $8,600 total current assets and $6,085 in sales doesn’t inspire much confidence, either. The problem is that although those $6 thousand in sales that were generated by IMHC may seem rather underwhelming MAXD themselves were incapable of reaching even that amount. In fact, let’s take a look at what they had in terms of financials as of March 31, 2016:

At least back in April MAXD announced that they had been able to repay $3.6 million in convertible notes. An impressive achievement, indeed, but whatever positive effects it might have had got erased almost immediately by the fact that the shareholders of the company had already been put through a severe amount of dilution.

During the first three months of the year MAXD issued 292 million shares as a conversion of debt and accrued interest and 12 million shares for services. In April another 78.9 million shares were issued a conversion of $192 thousand in debt. MAXD may have stated that they have paid-off all of the previous outstanding convertible notes but the lack of revenues makes it obvious that they will have to continue raising funds from outside sources. The subsequent events section of the report reveals exactly that – on April 6 MAXD sold a $171 thousand note convertible into shares at 35% discount which was followed two days later by an agreement to issue up to $2 million in a convertible note.

The company is still continuing its litigation against VSL while in a PR from February it stated its plans to appeal the court’s decision regarding the company’s litigation against Google. Is this enough to offset the myriad of red flags? Ultimately, it is up to you to decide.