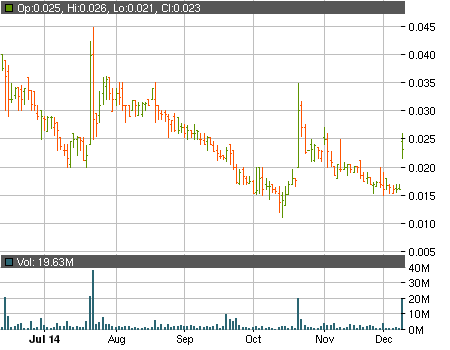 Hypersolar Inc (OTCMKTS:HYSR) are the developer of a technology to produce hydrogen through the use of sunlight and any source of water. In order for their system to be commercially viable the voltage of 1.5V is needed and in a PR published yesterday the company announced that they are now one step closer to that number after reaching 1.25V. The last time the company announced a breakthrough in the voltage was way back at the start of February when they achieved 1.2V.

Such major news could not remain unnoticed by the market and indeed the press releases reinvigorated investors’ confidence in the stock and they rushed towards it. The buying pressure was so immense that HYSR opened yesterday’s session with a massive gap up at $0.0245; at the end of Monday’s trading the company closed at $0.016. Throughout the trading day over 20 million shares changed hands compared to less than 600 thousand for the previous session.

The problem is that in the past the stock has made quite a few similar PR-fueled moves up the chart just to crash back down in the following sessions. Yesterday’s announcement may have been significant but the ticker has begun showing signs of weakness already. Although it closed the session with a gain of 45% the closing price of $0.0232 was actually lower than the opening price.

One of the reasons for the stock’s inability to keep its gains is the troubling financial state of the company. On November 10 the financial report for the quarter ending September 30 was submitted and it contained the following numbers:

In addition to the lackluster cash position and the massive working capital deficit shareholders of the company have also been put through a crushing amount of dilution. The number of outstanding shares grew from 194 million to 429 million during the fiscal year that ended on June 30. 180 million of the newly issued shares came into existence as a conversion of debt at an average price of just $0.0025. During the first quarter of HYSR’s current fiscal year they issued 19 million shares that were priced even lower – $0.0017 each. With another $424 thousand in outstanding convertible notes at the end of September the dilution might not be over any time soon.

Yesterday’s PR might be able to keep investors excited for a while but the risks around the stock should not be underestimated. If the millions of discounted shares find their way to the open market or if the company once again falls into a prolonged silence the ticker could suffer another steep decline. Do your own due diligence and adjust your position accordingly even if you believe in the potential of HYSR’s technology.